It’s maple sugaring season here in New Hampshire and the sap has been flowing. We have a few of our maple trees tapped here at home and have been in the process of boiling sap every day. If you’re not familiar with maple syruping here in New England the sap starts generally flowing between mid-February and mid-March. As the temperatures begin to warm up above freezing, during the day, the sap is released from the trees. It takes up to 40 gallons of sap from a tree to make just one gallon of syrup!

To further our quest for maple flavors and uses of the delicious maple syrup, we attended an event at the Tamworth Distillery right here in Tamworth. It was part of their After Dark Series: Spent Barrels and Sugarshacks. As we walked in the door we were greeted by a plateful of moist and sweet coffee cake slices made by local bakers at the Cup & Crumb.

Early on in the event, Sugarer, Brad Streeter, from Young Maple Ridge Syrup out of Sandwich, NH shared with us his experience running his pro-level syrup operation along with his partnership with the Distillery. Seasonally, the Distillery shares a spent 50 gallon bourbon barrel with Young Maple Ridge Syrup and Brad boils down 2000 gallons of sap into syrup and fills the barrel. After 6 months of aging, the syrup from the bourbon barrel is ready for bottling and enjoyment, the flavor is simply divine.

The night continued on with a tour of the distillery and their scratch-made distillation process. To follow, we had a great time sampling delicious spirits and how they can be paired with Maple Syrup. The samplings included their Old Hampshire Apple Jack, Chocorua Cider Rye and Old Hampshire Apple Brandy.

As the night wound down we were treated with ice cream from Sandwich Creamery drizzled in maple syrup which rounded off our culinary journey very nicely.

To learn more about:

If you’re cruising down route 25 stop in at the Cup & Crumb for some treats: http://www.cupandcrumb.com/ 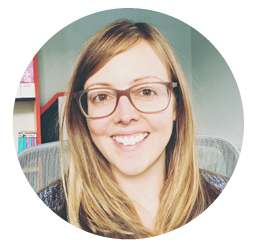 Amy is a designer, communicator, and idea generator with a belief in not leaving better to the future. Not only passionate about design but she has taken up learning to play the cello. When she's not in the studio she can be found practicing her tones or walking Smoky.. Read more by Amy...